About the Herbs
Endorsements
History 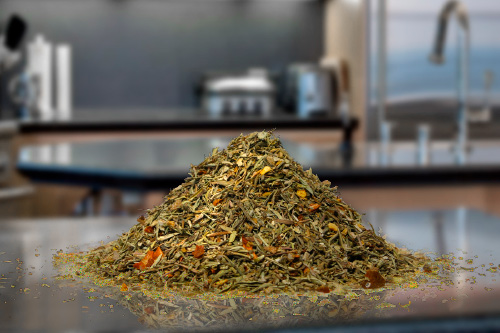 Anise- One of the anise family, a small oval seed known for its licorice taste, slightly sweet. Native to the Middle East and Eastern Mediterranean, it was used in Europe by the 14th century and brought to the New World by early colonists. Anise is widely used as a digestive, and in India, to sweeten the breath.

Basil- Available in many exotic varieties, including cinnamon and lemon; important to Italians, French, and especially Californians. Large oval leaves are bright green, with a warm earthy smell suggesting clove. The essential oil is used in aromatherapy to allay mental fatigue.

Black Pepper- Once worth literally its weight in gold, now the most common spice in the Western world. Black peppercorns are the sun-dried and fermented unripe fruit of the vine Piper Nigrum.

Chilies- The capsicum family includes some 200 kinds of chilies and sweet peppers, originating in tropical America and spread worldwide. Ripe fresh chilies are dried and ground or crushed into flakes, adding savor and life to a wide variety of cuisines.

Cilantro- The delicate leaf of the coriander plant, cilantro's flavor is unlike that of the seed, and is essential in Mexican and Chinese dishes. The taste is so distinctive that it is often passionately loved or hated. Dried, it's much milder.

Coriander- A pale round or oval seed essential in curry powders, used for both savory and sweet dishes, and whose essential oil flavors chocolate. Now cultivated world wide, coriander's spread from the Middle East is documented back 3000 years, including its appearance in Massachusetts before 1670.

Cumin- Also essential to curry powders, this oval light-brown seed is a pungent and distinctive part of the cuisines of Mexico, North Africa, India, and the Middle East. Native to the Nile, it was spread to the New World by Spanish explorers.

Dill Seed- Used in Medieval times for love and against witchcraft, dill is grown for both seed and weed. In northern European and Russian cuisine, the flat, oval seeds appear most commonly in pickles, breads, stews, potatoes and seafood. They are rich in mineral salts and beneficial for stomach and digestive ailments.

Fennel- Similar in taste to anise, cultivated since pre-Roman times for digestion and eyesight, scorpion and snake bites, and as protection against witchcraft. It is important in Italian, lraqui, and Indian cuisine, and in Europe as a seasoning for fish.

Lavender- Often found in sachets for its lovely fragrance, but rarely in food. It is essential for accenting Herbes de Provence.

Lemon Peel- Dried and minced, it accents many dishes with a light citrus touch.

Marjoram- Used in the Middle Ages as a perfume, the mild green leaves impart their distinctive touch to Italian seasonings, Hungarian meat dishes, pizzas, eggs, and with fish such as haddock. Infused in teas, they soothe the nerves, help with sleep and relieve seasickness, among other miracles.

Oregano- Closely related to marjoram and used very similarly, it is an essential flavor in Italian and Mexican cuisine. Ancient Egyptians treasured it for its power to heal, disinfect, and preserve.

Paprika- A popular red chili powder, sweet or slightly pungent with a faint bitter aftertaste. It is essential to Hungarian and many Balkan dishes, as well as widely used in Spain.

Rose Petals- first cultivated in Persia and China, roses have lent their fragrance to scented waters, jellies, wines and candies for centuries. They are a versatile edible, and reputed to soothe skin, cleanse the blood and tone capillaries.

Sage- known by the ancients to promote longevity, the gray-green downy leaf is a valuable aid in digesting fatty foods, both sweet and savory. Often used with poultry, it is also delicious with other meats and in sauces, or as an infusion for teas and vinegars.

Savory- peppery and spicy, the Romans valued its disinfectant and aphrodisiac qualities. Bees love it, and its marriage with other herbs such as thyme is sublime.

Tarragon- Very important in French cuisine, the glossy, long, narrow leaves impart a warm, subtle, distinctive flavor, bittersweet and peppery at once. It is used with salads, vinegars, omelets, herb butters, poultry and fish, also as a digestive.

Thyme- Most versatile of all, used in Roman Soldiers' baths to increase vigor, by the Egyptians for embalming, and in the Middle Ages "to enable one to see the Fairies". It aids digestion of fats, enhances most meats and poultry, is essential to stocks, marinades, stuffings, soups and stews, and flavors Benedictine liqueur. If I had only one herb, it would be Thyme.
Good Thyme Herb Company, Post Office Box 975,
Mendocino, California 95460
Phone: (707) 964-0509
e-mail: herbs@goodthyme.com